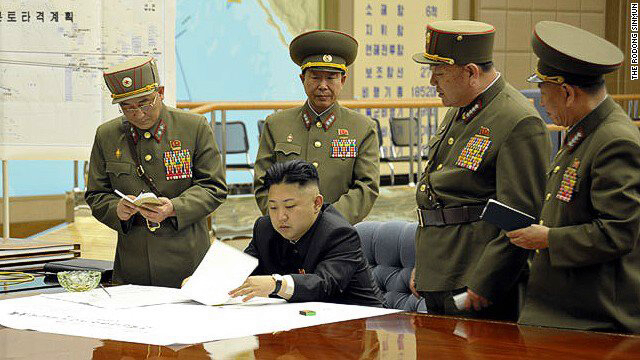 North Korea warned last night it had ratified a “merciless attack” against the United States in a war which could start “today or tomorrow”.
As leader Kim Jong-un’s aggressive rhetoric hit a new level, the army threatened attacks by a “smaller, lighter and diversified” nuclear force.
The moment of explosion is approaching fast,” the North Korean military said, warning that war could break out “today or tomorrow”.
A spokesman for the General Staff of the Korean People’s Army added: “We formally inform the White House and Pentagon that the ever-escalating US hostile policy toward us and its reckless nuclear threat will be smashed.”
In response, President Obama ordered a ballistic missile defence system to be moved to the nearest US military base on the Pacific island of Guam, 2,000 miles from North Korea’s capital Pyongyang.
As the threat grew, PM David Cameron warned against any move to abandon Britain’s Trident nuclear deterrent.
He said: “Does anyone seriously argue that it would be wise for Britain, faced with this evolving threat today, to surrender our deterrent?”(Abeg make dem take am easy o! This one don pass play!!! Abi dem won bomb this world haba!!)

ENTREPRENEURSHIP, INFORMATION, NEWS-POLITIC, BUSINESS
View all posts by udeozo chibuzo →
This entry was posted in Business and Investments. Bookmark the permalink.

6 Responses to N’ KOREA WARN NUCLEAR WAR ON US

home of fiction and poetry

Ethical Safe Skincare Products - Made with care in Nigeria

Dare To Be You.

4 out of 5 dentists recommend this WordPress.com site

ways to make money from home, without investing

That special place for special people

Amplify the Great Inside Of You - Define Your Success